This project has its beginning in our TZR-250 Hybrid that we originally started to build to perform some chassis dynamics testing and to develop a few new engine and chassis components. As we progressed and the early results were extremely encouraging, we decided to get a bit more ambitious and build a complete bike. And by complete we mean a finished article just like it would have rolled off the production line at a major manufacturer. We hope we succeeded. 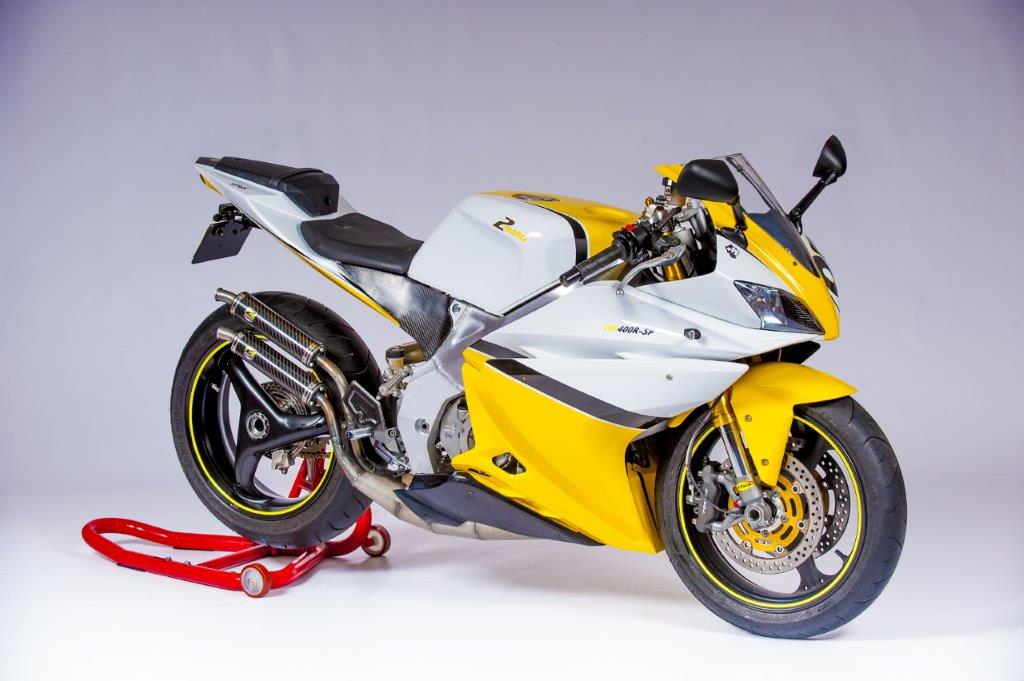 The full photo gallery of the finished article is here: 2M400R-SP Glamour Photos

Since the Aprilia RS-250, no new 2-stroke bikes have been built by any manufacturers. We thought it was about time to rectify that situation. And we like the RD-350 YPVS engine as there are lots of relatively inexpensive engine upgrade option courtesy of our American cousins who insist on racing some crazy Yamaha Banshee quads, some making in excess of 150 horsepower!

Having built plenty of specials over the years, we had a pretty good idea what would work. And, what doesn't. The YPVS engine is fairly long, so most of the 250cc type V-twin chassis are too short, as we know from experience. In the end, the Yamaha TZR-250 3MA chassis fit the bill perfectly. Plus, the same chassis is used in the TZR-125 and the SZR-660, so availability is reasonable. And, we knew the engine would fit with only a few modifications to the chassis.

We now needed to turn our attention to the suspension. The front was pretty easy as most of the modern 600cc sportsbike forks are a good starting point, though we knew they would be bit to long for a 250 type bike. On the rear, the original 3MA swinging arm wasn't ideal as it has all the bracing underneath right where we need plenty of room for the expansion chambers. We also needed a fairly short swinging arm in order to keep the wheelbase in the 250 bike range. In the end, we chose an RVF-400 single-sided arm, although this is as much of a style choice as a functional one. There are other arms that would work.

With that we felt we had a pretty good set of basic ingredients to fulfill the brief for this project. Now for the hard part. In our minds, it needed to look thoroughly modern, which meant using modern bodywork. However, we didn't want it to look like a 600cc or 1000cc knock-off. So, R6, R1, GSXR, CBR stuff wasn't right, plus they were all too wide having been made to fit across-the-frame 4 cylinder engines. One option we liked was the Aprilia RSV-125 but availability was very poor. So, after looking at every possible option, we decided to use the bodywork off the Yamaha YZF-R125.

And there you have it:

Fancy building one for yourself?

There are several ways you can ask us to help if you fancy the end results of our 2M400R-SP. For those of you who fancy this as a project you can have us modify your existing frame, supply the engine mounting kit, suspension linkages and hardware kit. You will need to supply the frame, the swinging arm, and the shock absorber (although we can supply this if you wish). When you bolt it together, it will look like this, ready to accept the YPVS engine and front-end and rear wheel and hub: 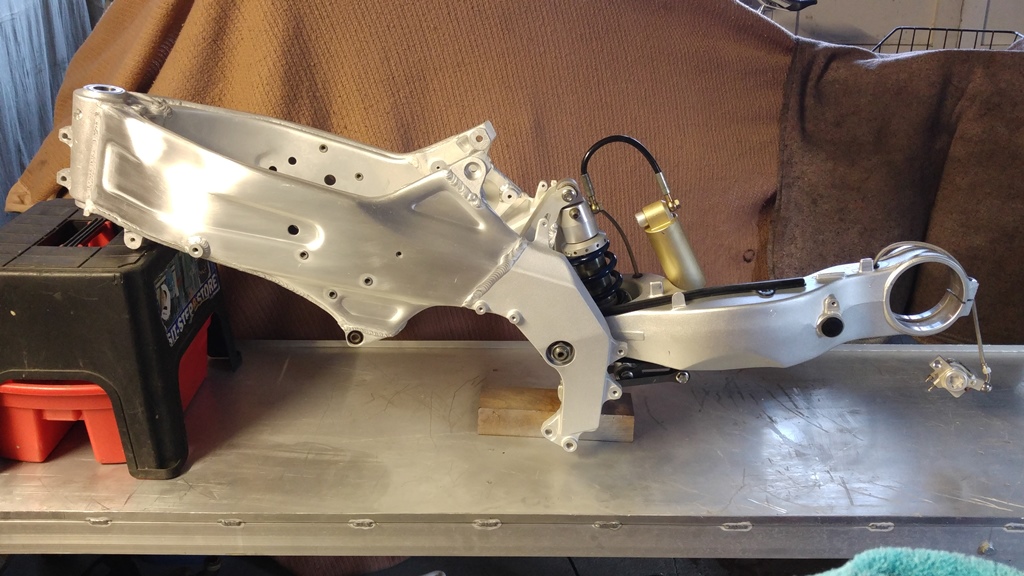 And for those of you who don't fancy a project, we can supply a finished, ready-to-ride bike. Prices are on application. Either way, though, you're ensured to end up with something that is properly engineered and works as you'd expect.

You can see that this isn't exactly your standard RD-350 Power Valve engine. However, the power and torque figures can be achieved without the fancy TZ-350 parts. A standard RD-350 bottom end would easily be sufficient. It's the tuning of the barrels, the combustion chamber shapes, and the overall setup of the engine that provides the measured performance.

We are very pleased with the engine's performance figures. It is probably as far as you can push the original barrels. For comparison, a 421 cc Athena kit usually makes around 75 bhp.

One thing that is worth noting is that we significantly reduced the width of the engine, which allowed us to fit it into the YZF-R125 bodywork. We achieved this by using a dry clutch, an electric water pump, and the lightweight generator and low inertia flywheel. It may be possible to fit the YZF-R125 bodywork around a standard engine but more cutting would certainly be required.

We can't sing enough praises for one of Yamaha's masterpieces in terms of road going frames. It's light, stiff, and would not look out of place on a Moto2 bike. One of the things we really didn't want to carry over from the original bike was the torsion bars that are complete after thought and band-aid to tame the inherent engine rocking motion, largely due to less than ideally positioned engine mounts and a grossly under-balanced crankshaft.

Since we corrected the crankshaft balancing problem, we now needed to address the engine mounting layout before we could throw away those torsion bars. The solution was to design and fabricate brackets that would move the mounting point to the right and left extreme to act as triangulation points. Despite plenty of naysayers, this method has worked exceedingly well and a the combination of the re-balanced crankshaft and the retained rubber mounting, vibration are well within acceptable limits. 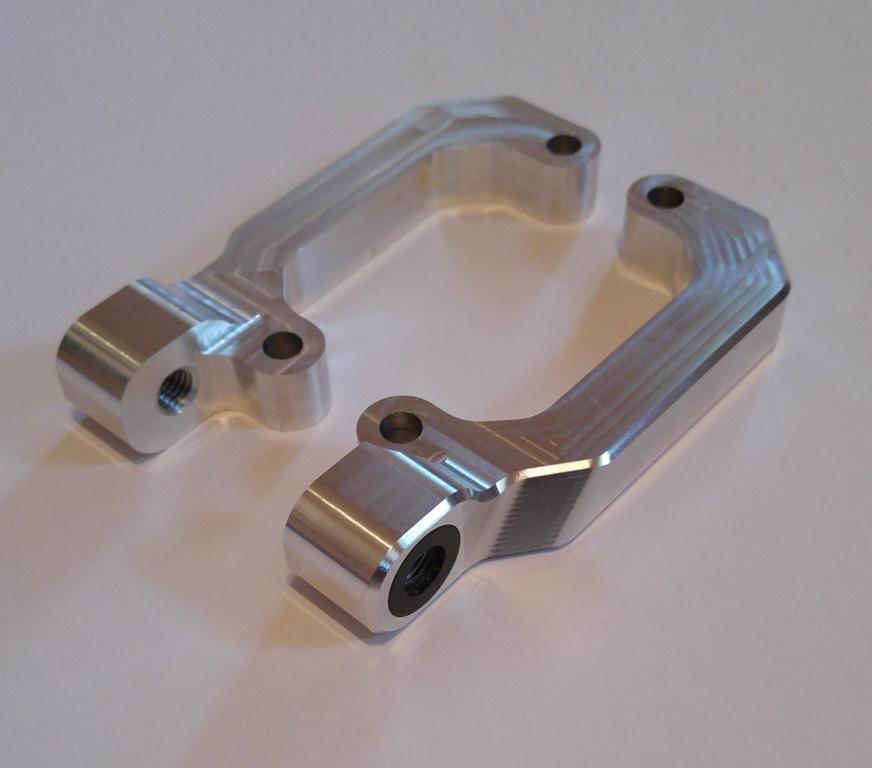