It's a Rolling Chassis!

Well, we've been busy working away in the workshop and the NSR is now on its wheels. This is the stage where you can verify that the design and the fabrication have worked as intended, frame geometry can be checked, fairings can be test fitted, and a good old bouncing on the suspension front and back. We're pleased to report that everything is as expected. These days, if we're honest, we would be pretty disappointed if it was any other way. 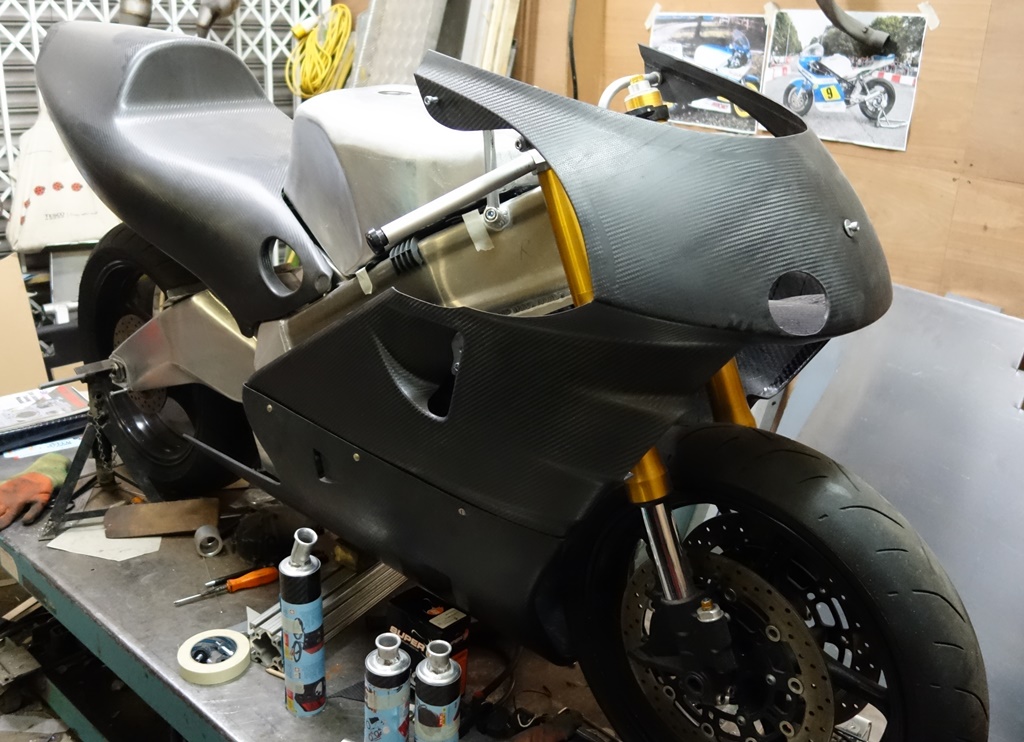 We've also built a bespoke replica tank in aluminium, and started on the exhaust work. The forks are not the correct ones as we are still waiting for the one-off yokes to come back from the CNC centre. Once that happens, we can finalise the front end with those lovely Ohlins forks that are still sitting in their box. 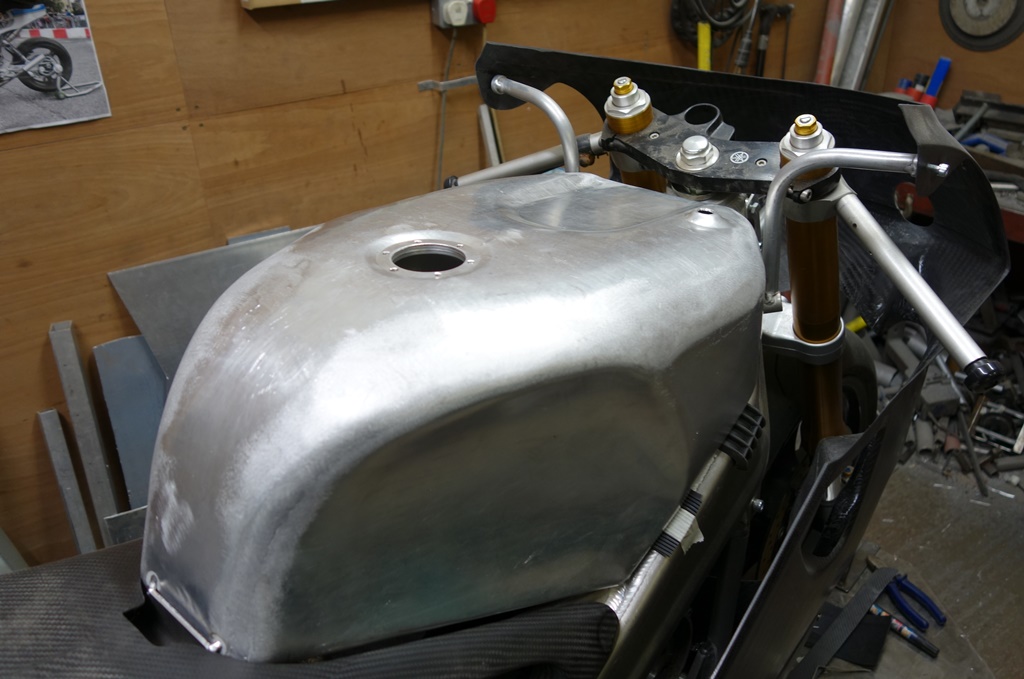 We are getting very close to that exciting stage in every project where a bunch of machined and fabricated metal becomes a motorcycle. That is, the chassis is ready for front and rear suspension and wheels. We are at that stage now except for the yoke set that is currently being machined.

So while we await their arrival, here are a few snaps of the finished welded frame, engine cradle, rear seat frame, and swinging arm.

A much overdue update on the chassis construction

So, after some delays due to customer changing his mind on the bodywork on the YZR-500 and it also requiring an engine rebuild after the Classic TT at the Isle of Man, we got back onto the NSR-500 project. As we're using pre-preg carbon fibre bodywork from the original HRC moulds, we wanted to design the frame so that the bodywork would fit with no or only very minimal modifications. Given that we are using an RG-500 engine, this is not as easy as you might think.

The body work is from this version of the NSR-500:

Originally, we were going to essentially duplicate the YZR-500 frame and simply adapt it to the RG-500 engine. However, there was no way that the HRC bodywork was going to fit well onto that. So, we decided to build the frame as close to the above version as possible. That, of course, meant designing new upright frame sections, new frame spars, etc. It should result in a more pleasing chassis onto which the bodywork, especially the tail section will fit far better. The chassis geometry will be identical to the YZR-500, which we already know works well.

Here are the first fitment trials with the frame uprights in place: 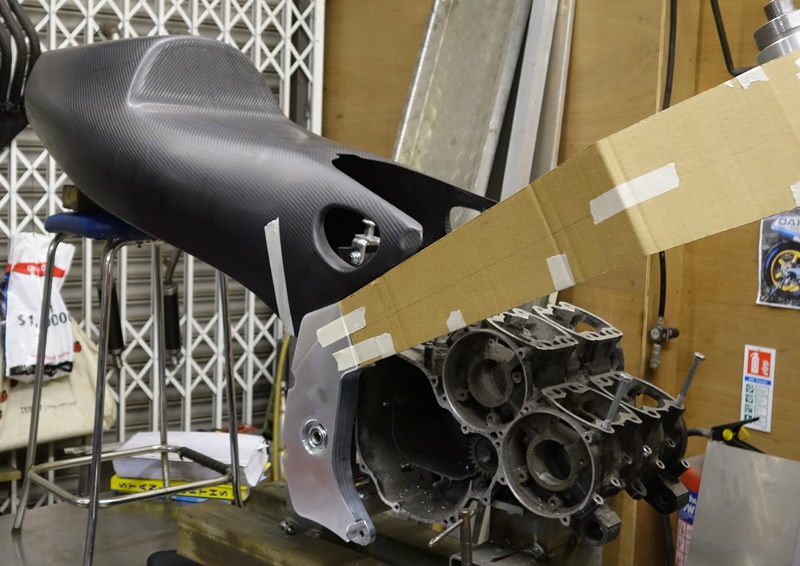 Next was building the press plates and bending jigs for the frame spars. With a bit of work (and the occasional swearing) we ended up with this: 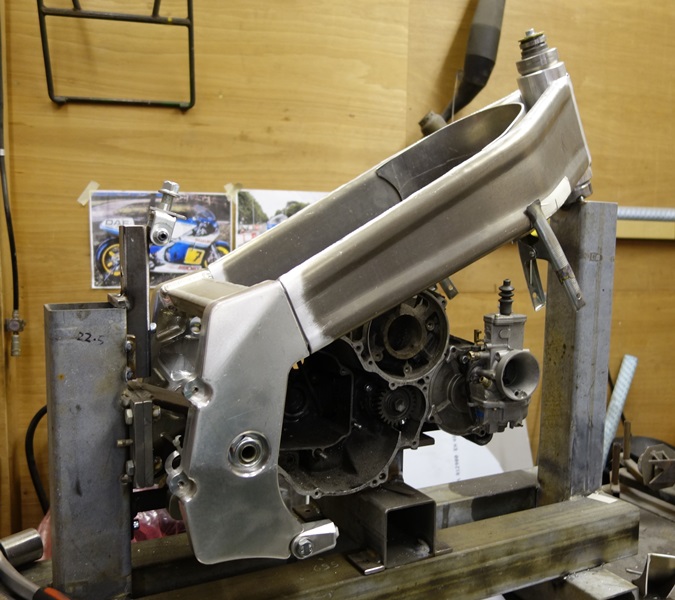 Even though it was far more work than we had originally planned, both design and fabrication wise, we're pretty pleased with how its worked out this far. Still lots to do and we'll provide more updates in this blog as well and please like us on our Facebook page 2MotoUK.

Here is the complete set of pictures so far:

Official Start of the NSR-500 Replica

While we're waiting for the YZR-500 replica to come back from the painters, we've been busy making a start on the second version of our 2Moto GP5 chassis. This one, as requested by our customer, will be a Doohan era NSR-500 Replica. With NSR-500 engines unavailable, it will have a Suzuki RG-500 engine in it making about 120 bhp. The chassis geometry will be nearly identical to the RD-500 engined YZR Replica with minor modification to optimise COG location for the RG engine and necessary engine mounts.

Here is what the eventual result should come very close to: 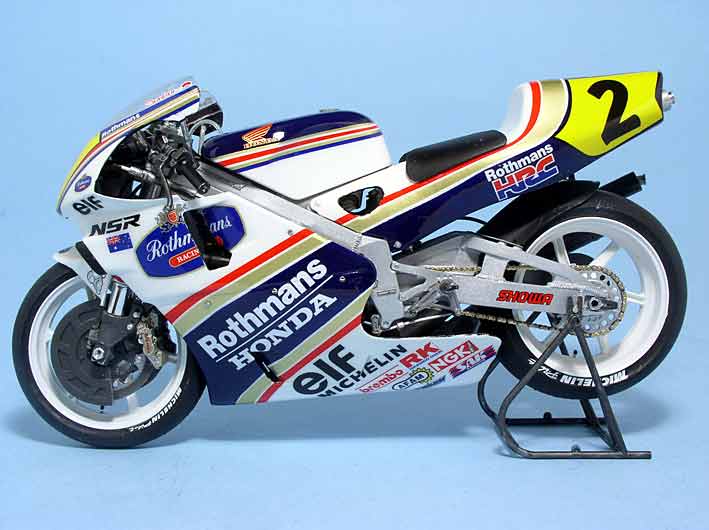 While the starting point for the YZR-500 Replica was an existing bike, meaning bodywork, etc. already existed, the NSR-500 Replica is essentially a start from scratch. As such, we wanted to do everything we can to make it an even better replica. Of course, an NSR-500 engine would have been great, but they are not available. We didn't even try.

However, we did score a coup in locating the original Honda HRC moulds of the NSR-500 bodywork. Back in the '90, Honda had their GP bodywork made in the UK, and these moulds have survived to this day. So, we have commissioned as complete set of bodywork in pre-preg carbon fibre. We will be making small adjustment to the frame kit to fit this bodywork as best as possible. And, we will probably make a bespoke tank rather than try to adapt one from a road bike.

Here are a couple of pictures of the HRC bodywork. As you'd expect, it is of exceptional quality.